That antique procedure whereby you sit at your desk, fish out some writing paper, unscrew your bestest fountain pen, find a piece of blotting paper, then a bottle of ink (blue, black or green?), then composing your short or long, serious or ludicrous, huffy or languorous message to your sweetheart/your landlord/your grandmama/the man who found your dog, then folding the letter, opening three drawers until you find an envelope, then cadging a stamp from your sister, writing the address – make sure your 3 does not look like an 8 - stuffing the envelope, licking the strip of glue on the triangular flap, bashing the flap down to ensure postal security, licking the stamp – euch, why don’t they make better tasting glue, affix the stamp, ensuring the King or Queen’s head is not upside down (a punishable offense), then find your hat and coat, swap your slippers for your smart hightop boots and trip down the road to the postbox and pop this careful creation into the comforting red cylinder with the black top hat, to join the millions of other letters flowing around the whole world like corpuscles in a bloodstream, in the absolute confidence that in sometimes four, sometimes eight but certainly in 24 hours this letter of yours will find its way into the hand of your MP/your bank manager/your dangerously ill beloved aunt/ your old school pal.

All of that labour intensive malarkey was terminated by the internet, first by email, then by texting. Maybe there are still some old ones now in their 70s and 80s who write letters. Time was that everyone used to do it. It was the telephone before the telephone.

The funny thing, and I have never seen any explanation for this anywhere, is that some people kept other people’s letters. Not just for a week or so and then chucked them, but for ever, so that I guess boxes and bags of them were found after their demise; and the discoverers also kept them; and if they were written by somebody famous, often they found themselves being printed in big important books. Even if they said something like

Was it that the friends and relatives of anyone who was suspected of greatness eagerly collected their letters? Or are their sacks and hampers and bales of letters from total nobodies cramming the attics of the western world and gradually finding their ways to the nearest landfill?

In this large volume of selected letters of James Joyce we find a whole string of letters he sent to Nora Barnacle when he was on a trip to Ireland in 1909 and she stayed in Trieste. Very remarkable they are too. Even better would it have been to have had Nora’s letters to Jim in this sequence. But well, of course, they aren’t here, I suppose because maybe Jim The Joyce did not keep hers as she kept his; because she was just a mere appendage to the great man (he was 27 at the time); or Richard Ellman the editor did have Nora’s letters but of course excluded them as plainly Nora is not Jim.

Jim and Nora met in 1904; their son Giorgio was born the following year and daughter Lucia in 1907. So here is a young father writing to his young wife in 1909. My, I wonder if all husbands are quite so… torrential… towards their wives. Great cataracts of gushing sluicing words rain down upon Nora’s uneducated head in these letters.

At the time when I used to meet you at the corner of Merrion Square and walk out with you and feel your hand touch me in the dark and hear your voice (O Nora! I will never hear that music again because I can never believe again!) at the time I used to meet you, every second night you kept an appointment with a friend of mine outside the Museum, you went with him along the same streets. Down by the canal… I have heard this only an hour ago from his lips…. O Nora, is all to be over between us? (6 August)

It is half past six in the morning and I am writing in the cold. I have hardly slept all night, Is Georgie my son? (7 August)

My darling I am terribly upset that you haven’t written. Are you ill? I have spoken of this affair to an old friend of mine, Byrne, and he took your part splendidly, and says it is all a “blasted lie”. What a worthless fellow I am! But after this I will be worthy of your love, dearest. (19 August)

Do you know what a pearl is and what an opal is? My soul when you came sauntering to me first through those sweet summer evenings was beautiful but with the pale passionless beauty of a pearl. Your love has passed through me and now I feel my mind something like an opal, that is full of strange uncertain hues and colours, of warm lights and quick shadows and of broken music.
(21 August)

Nora, my true love, you must really take me in hand. Why have you allowed me to get into this state? Will, you, dearest, take me as I am with my sins and follies and shelter me from misery. If you do not I feel my life will go to pieces. … One moment I see you like a virgin or Madonna the next moment I see you shameless, insolent, half naked and obscene! (2 September)

Guide me, my saint, my angel. Lead me forward. Everything that is noble and exalted and deep and true and moving in what I write comes, I believe, from you. O take me into your soul of souls (5 September)

I hope you take that cocoa every day and I hope that little body of yours (or rather certain parts of it) are getting a little fuller. I am laughing at this moment as I think of those little girl’s breasts of yours. You are a ridiculous person, Nora! (7 September) 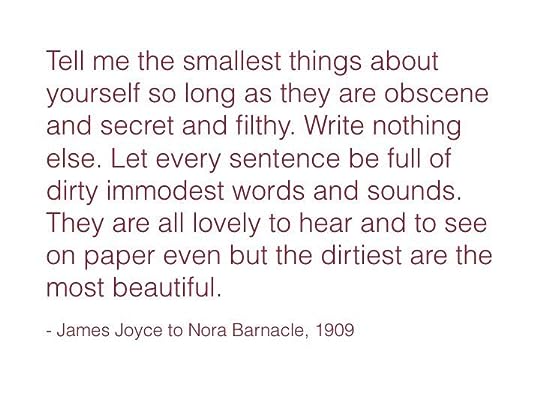 Well, I was going to quote from the following letter of 2 December but really, it’s quite obscene, and you might be reading this over breakfast with your family, and that would never do. But suffice to say, he imagines various acts and positions and goes on and on about wild beastlike cravings, odours, glorifying in the stink, white girlish drawers – you get the drift.

Eight letters were written with porny passages in them and until 1975 they were censored. But Richard Ellman finally got permission to print the whole of them. The effect they have is not pleasant, I do admit, but in some ways all the mooning about souls and pearls and opals is just as unpleasant to me. Really and truly, reading Joyce’s letters is not that great an experience. You are tipped into the ordinary meanspirited filth of life; you drag along with Jim, cadging some few pounds here, moaning about his boring job there – apart from being an undisputed genius he was a pain in the neck and often a dreary woebegone creep. His better qualities don’t really shine out that much.

Still, this is as close as you can get to the fine detail of the life of Jim. In the future we will know a whole lot less about our great writers because no one will be publishing their Collected Texts and Emails Vols 1-7. That may be a good thing, of course.
File Name: james joyce letters to his wife.zip
Size: 25161 Kb
Published 19.03.2019

But perhaps with enough context, we might be able to sublimate this post into a more dignified class of porn — a richly poetic and literary sort of pornography. As the story goes, James Joyce met and fell in love with Nora Barnacle in June of , and, after what I imagine to be a hot, sweaty summer in Ireland, they were eloped by October. During November of , James left his family in Trieste, Italy to return to Dublin on a solo mission to publish his short story collection Dubliners. Presumably, to ensure a strong, long-distance connection, and to dissuade James from entering the cathouse at night, James and Nora began writing letters back and forth. However, this publication would be incomplete without perhaps the most vulgar writings by one of the most brilliant vulgarians in literary history: James Joyce.

Nora hoped to keep Joyce away from courtesans by feeding his fantasies in writing, and Joyce needed to woo Nora again—she had threatened to leave him for his lack of financial support. If those prudish censors of Ulysses had read this exchange, they might have dropped dead from grave wounds to their sense of decorum. As far as I can ascertain, the letters exist in publication only in the out-of-print Selected Letters of James Joyce , edited by pre-eminent Joyce biographer Richard Ellmann, and in a somewhat truncated form on this site. Of our interest in them, he asks:. Does anyone have the right to read things that were clearly meant only for two specific people? Questions worth considering, if not answered easily. James Joyce Plays the Guitar,

The often explicit letters James Joyce wrote to Nora Barnacle contain the same mass of contradictions as his famous literary works, like Ulysses. Yes, that James Joyce. In his notorious set of NSFW love letters to his wife Nora Barnacle, Joyce did not hold back from expressing exactly what was on his mind. Literature scholar Wendy B. Contradictions are built into the way Joyce addresses his lover with strings of adjectives that create tension. In some portions of these letters, Joyce assumes ironic voices and mocking tones. And yet their opposite personalities were part of what attracted Joyce to her.

In the letter below, James Joyce writes to his future wife Nora about his private unmet needs. Do you believe in my love at last, dearest? Ah, do, Nora! Why everyone who has ever seen me can read it in my eyes when I speak of you. The time will fly now, my darling, until your loving tender arms encircle me.

Love at first sight poems for him

Disney princess crochet how to

This i believe life lessons book